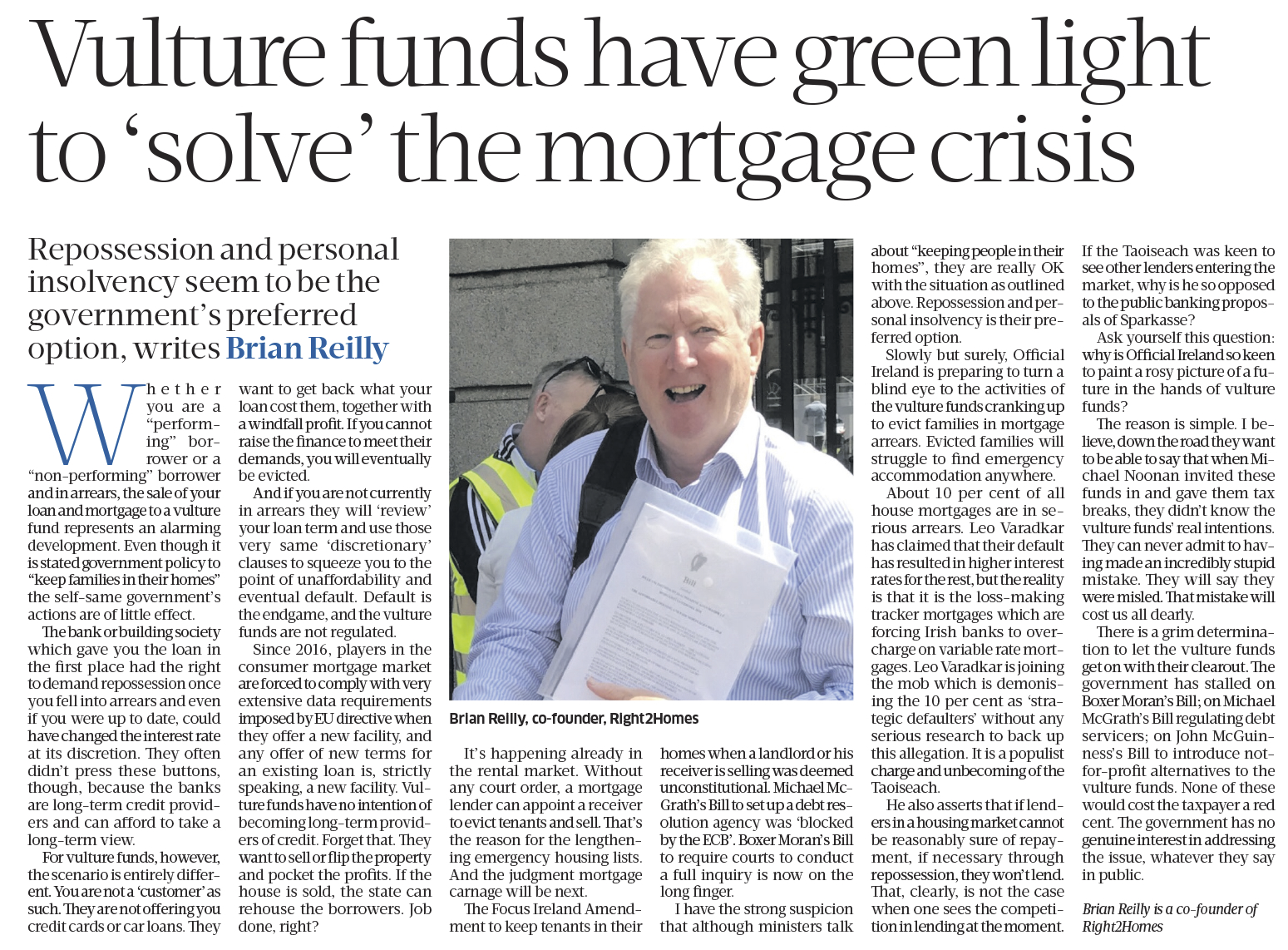 MORTGAGE RESCUE – NO COST TO THE TAXPAYER

WHETHER you are a “performing” borrower or a “non-performing” borrower and in arrears, the sale of your loan and mortgage to a Vulture Fund represents an alarming development. Even though it is stated Government policy to “keep families in their home”s the self-same Government’s actions are of little effect.

The Bank or Building Society which gave you the loan in the first place had the right to demand repossession once you fell into arrears and, even if you were up to date, could have changed the interest rate at it’s “discretion”. They often didn’t press these buttons, though, because the banks are long term credit providers and can afford to  take a long term view.

For Vulture Funds, however, the scenario is entirely different. You are not a “customer” as such. They are not offering you credit cards or car loans. They want to get back what your loan cost them, together with a windfall profit. If you cannot raise the finance to meet their demands, you will eventually be evicted.

And if you are not currently in arrears they will “review” your loan term and use those very same “discretionary” clauses to squeeze you to the point of unaffordability and eventual default.

Default is the end game, and the Vulture Funds are not regulated.

Since 2016 players in the consumer mortgage market are forced to comply with very extensive data requirements imposed by EU Directive when they offer a new facility, and any offer of new terms for an existing loan is, strictly speaking, a new facility. Vulture Funds have no intention of becoming long term providers of credit. Forget that. They want to sell or flip the property and pocket the profits. If the house is sold, the State can rehouse the borrowers,  job done, right?

It’s happening already in the rental market. Without any Court Order, a mortgage lender can appoint a Receiver to evict tenants and sell. That’s the reason for the lengthening emergency housing lists. And the Judgement Mortgage carnage will be next.

The Focus Ireland Amendment to keep tenants in their homes when a Landlord or his Receiver is selling was deemed “Unconstitutional.” Michael McGrath’s Bill to set up a debt resolution agency was “blocked by the ECB.” Boxer Moran’s Bill to require Courts to conduct a full inquiry is now “on the long finger.”

I have the strong suspicion that although Ministers talk about” keeping people in their homes,” they are really ok with the situation as described above.

Repossession and Personal Insolvency is their preferred option!

Slowly but surely Official Ireland is preparing to turn a blind eye to the activities of the vulture funds cranking up to evict families in mortgage arrears.

About 10% of all house mortgages are in serious arrears. Leo Varadkar has claimed that their default has resulted in higher interest rates for the rest, but the reality is that it is the loss making tracker mortgages which are forcing Irish banks to overcharge on variable rate mortgages. An Taoiseach is joining the mob which is demonising the 10% as “strategic defaulters” without any serious research to back up this allegation. It is a populist charge and unbecoming of an Taoiseach.

He also asserts that if lenders in a housing market cannot be reasonably sure of repayment, if necessary through repossession, they won’t lend. That, clearly, is not the case when one sees the competition in lending at the moment. If an Taoiseach was keen to see other lenders entering the market, why is he so opposed to the Public Banking proposals of Sparkasse?

Ask yourself this question, why is  Official Ireland so keen to paint a rosy picture of the future in the hands of Vulture Funds?

The reason is simple. I believe, down the road they want to be able say that when Michael Noonan invited them in and gave them tax breaks, they didn’t know the vulture funds’ real intentions. They can never admit to having made an incredibly stupid mistake. They will say they were misled.

That mistake will cost us all dearly.

There is a grim determination to let the vulture funds get on with their clearout. The government has stalled on Boxer Moran’s bill; on Michael McGrath’s bill regulating debt servicers; on John McGuinness’s bill to introduce not-for-profit alternatives to the vulture funds. None of these would cost the taxpayer a red cent. The government has no genuine interest in addressing the issue, whatever they say in public.

– Brian Reilly is a Co-Founder at Right2Homes