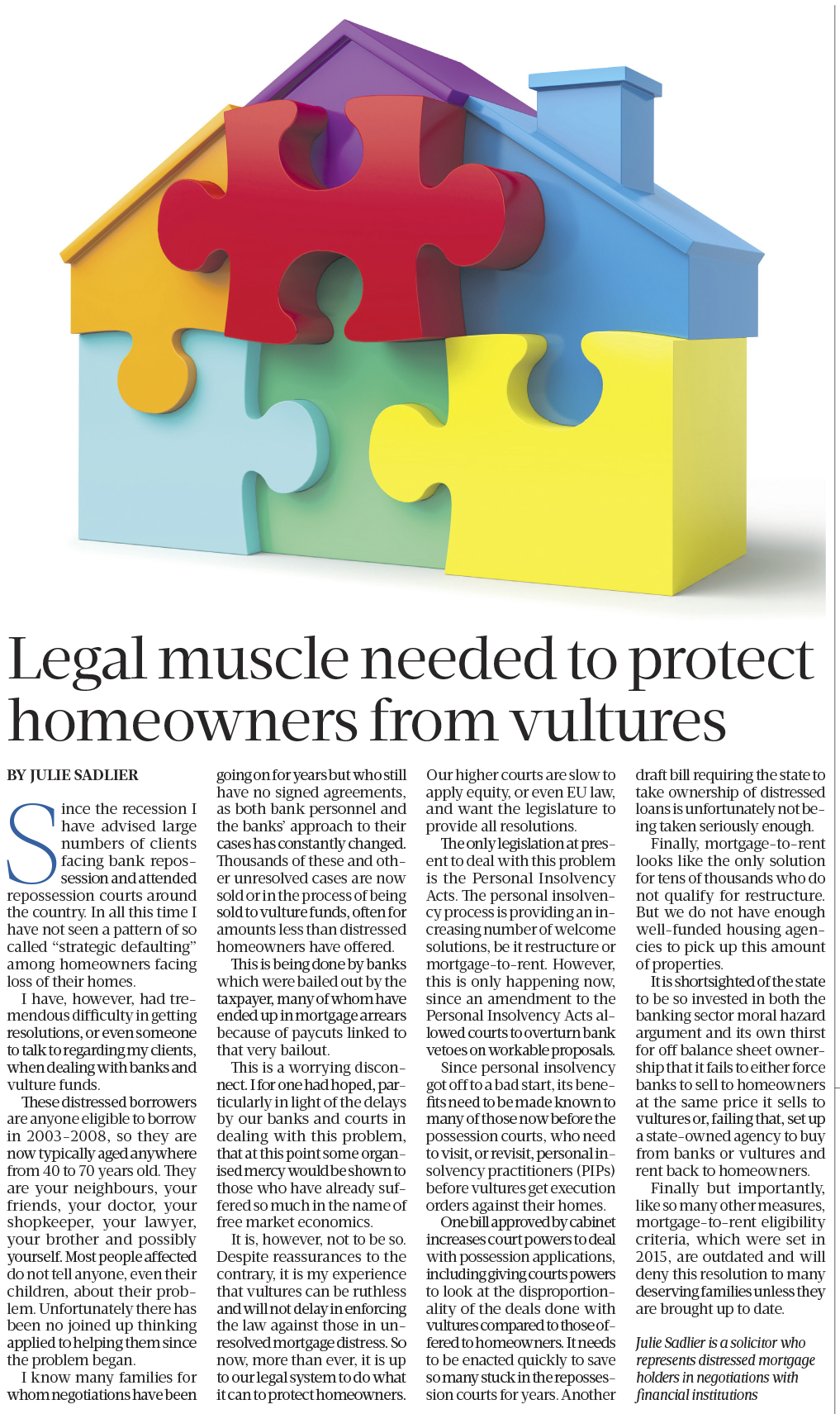 Since the Recession I have advised large numbers of clients facing bank repossession and attended repossession courts around the country. In all this time I have not seen a pattern or sign of so called “strategic defaulting” among homeowners facing loss of their homes.

I have, however, had consistent, tremendous difficulty getting resolutions or even someone to talk to, regarding my clients, in all banks and vulture funds.

THESE DISTRESSED BORROWERS are anyone eligible to borrow in 2003-2008 so they are now typically aged anywhere from 40 to 70 years old. They are your neighbours, your friends, your doctor, your shopkeeper, your lawyer, your brother and likely yourself. Most people affected do not tell anyone, even their children about their problem.Unfortunately there has been no joined up thinking applied to helping them ,since the problem began.

I know many families where negotiations have been going on for years but they still have no signed agreements as both bank personnel and bank approach to their cases has constantly changed. Thousands of these and other unresolved cases are now sold or in the process of being sold to Vulture Funds, often for amounts less than distressed homeowners have offered. This is by banks who were bailed out by the taxpayer,many of whom have ended up in Mortgage arrears because of paycuts linked to that very bailout. This is a very worrying disconnect,as I for one have hoped all along ,particularly in light of the delays applied by our banks and courts in dealing with this problem ,that at this point some organized mercy would be shown to those who have already suffered so much in the name of Free market economics.

It is ,however, not to be so as despite reassurances to the contrary, it is my experience that vultures can be very ruthless and will not delay in enforcing the law against those still in unresolved mortgage distress.

So now, more than ever, it is up to our legal system to do what it can to protect homeowners. Our Higher Courts are slow to apply equity or even EU law and want the legislature to provide all resolutions.

The only legislation in place at present to deal with this problem is the Personal Insolvency Acts and whereas Personal Insolvency is providing an increasing number of very welcome solutions, be it restructure or Mortgage to Rent for these people, only because of the amendment to the Personal Insolvency Acts allowing Courts to overturn Bank vetoes on workable proposals. However, as personal insolvency got off to a bad start it’s increasing benefits need to be made known to many before the possession courts who need to visit or even re visit PIPs before Vultures get execution orders against their homes.

One bill which has been approved by cabinet ,increasing court powers to deal with possession applications ,including giving courts powers to look at the disproportionality of the deals done with vultures compared to those offered to homeowners, needs to be enacted quickly to save so many stuck in the repossession courts for years get resolution.Another draft bill requiring the State to take ownership of distressed loans is unfortunately not being taken seriously enough.

Finally ,Mortgage to Rent looks like the only solution for tens of thousands who do not qualify for restructure but we do not have enough well- funded housing agencies to pick up the amount of properties for whom the only solution is Mortgage to Rent .In my opinion, it is very shortsighted of the state to be so invested in both the banking sector moral hazard argument and its own thirst for off balance sheet ownership that it fails to either force banks to sell to home owners at the same price it sells to vultures or failing that set up a state owned agency to buy from banks or vultures and rent back to home owners.

Finally but importantly, like so many other measures, Mortgage to Rent eligibility criteria, which were set in 2015, are outdated and will deny this resolution to many deserving families unless they are re set..