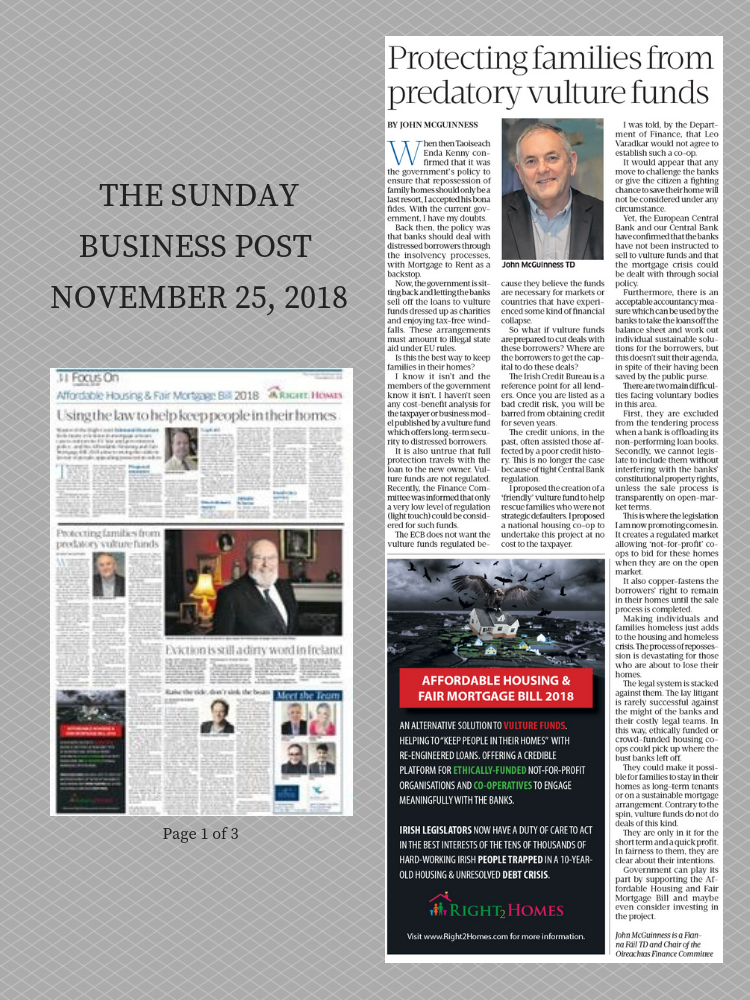 When then Taoiseach Enda Kenny confirmed that it was the government’s policy to ensure that repossession of family homes should only be a last resort, I accepted his bona fides. With the present government, I have my doubts.
Back then, the policy was that banks should deal with distressed borrowers through the insolvency processes, with Mortgage to Rent as a backstop.

Now, the government is sitting back and letting the banks sell off the loans to vulture funds dressed up as “charities” and enjoying tax free windfalls. These arrangements must amount to illegal state aid under EU rules.

Is this the best way to keep families in their homes? I know it isn’t and the government knows it isn’t.

I haven’t seen any cost benefit analysis for the taxpayer or business model published by a vulture fund which offers long term security to distressed borrowers.

It is also untrue that full protection travels with the loan to the new owner. Vulture funds are not regulated. Recently the Finance Committee was informed that only a very low level of regulation (light touch) could be considered for such funds.

The ECB does not want the vulture funds regulated because they believe the funds are necessary for markets or countries that have experienced some kind of financial collapse.

So, what if vulture funds are preferred to cut deals with these borrowers? Where are the borrowers to get the capital to do these deals?

The Credit Bureau is a reference point for all lenders. Once listed, you will be barred from obtaining credit for seven years.

The credit unions, in the past, often assisted those affected by a poor credit history. This is no longer the case because of tight Central Bank regulation.

I proposed the creation of a “friendly” vulture fund to help rescue families who were not strategic defaulters. I proposed a National Housing Co-Op to undertake this project at no cost to the taxpayer.

I was told, by the Department of Finance, that Leo Varadkar would not agree to establish such a co-op. It would appear that any move to challenge the banks or give the citizen a fighting chance to save their home will not be considered under any circumstance.

Yet, the European Central Bank and our Central Bank have confirmed that the banks have not been instructed to sell to vulture funds and the mortgage crisis could be dealt with through social policy.

Furthermore, there is an acceptable accountancy measure, which can be used by the banks to take the loans off the balance sheet and work out individual sustainable solutions for the borrowers but this doesn’t suit their agenda in spite of being saved by the public purse.

There are two main difficulties facing voluntary bodies in this area. Firstly, they are excluded from the tendering process when a bank is offloading it’s non-performing loan books.

Secondly, we cannot legislate to include them, without interfering with the banks’ constitutional property rights unless the sale process is transparently on open market terms.

This is where the legislation I am now promoting comes in. It creates a regulated market allowing ‘not for profit’ co-ops to bid for these homes when they are on the open market.

It also copper-fastens the borrowers’ right to remain in their homes until the sale process is completed. Making individuals and families homeless just adds to the housing and homeless crisis. The process of repossession is devastating for those about to lose their homes.

The legal system is stacked against them. The lay litigant is rarely successful against the might of the banks and their costly legal teams.

In this way, ethically funded or crowd funded housing co-ops can pick up where the bust banks left off.

They could make it possible to keep families in their homes as long term tenants or on a sustainable mortgage arrangement. Contrary to the spin, vulture funds do not do deals of this kind.

They are in for the short term and a quick profit. In fairness to them, they are clear about their intentions.

Government can play its part by supporting the Affordable Housing and Fair Mortgage Bill and maybe even consider investing in the project.

John McGuinness, TD can be reached directly via Email at john.mcguinness@oireachtas.ie