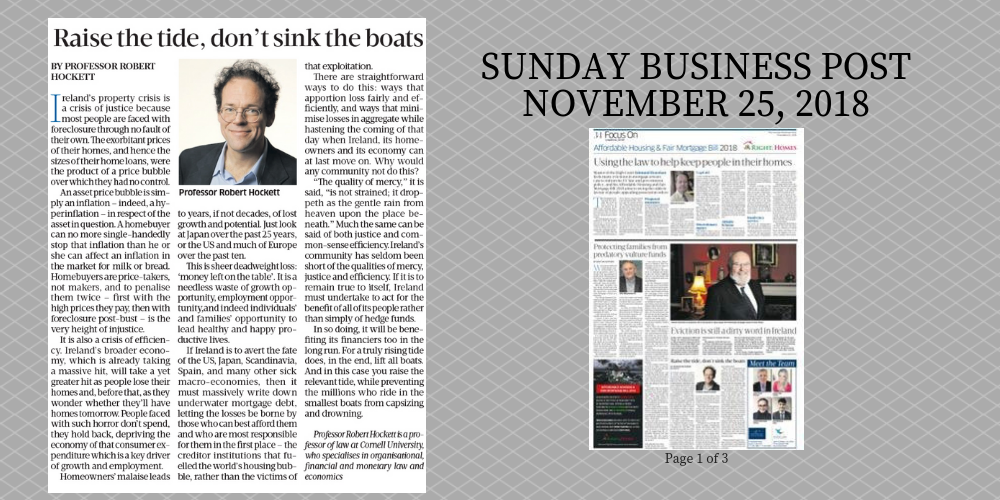 Ireland’s is a crisis of justice because most people are faced with foreclosure through no fault of their own. The exorbitant prices of their homes, and hence the sizes of their home loans, were the product of a price bubble over which they had no control. An asset price bubble is simply an inflation – indeed, a hyperinflation – in respect of the asset in question. A home buyer can no more single-handedly stop that inflation than she can an inflation in the market for milk or bread. Home buyers are price-takers, not –makers, and to penalize them twice once the bubble bursts – first with the high prices they pay, then with foreclosure post-bust – is the very height, or perhaps better the depth, of injustice.

Ireland’s foreclosure crisis is also a crisis of efficiency because Ireland’s broader economy is already taking a massive hit, and will take a yet greater hit, both as people lose their homes and, before that, as they stare ahead in mute fear and uncertainty over whether they’ll have homes tomorrow. People faced with such horror don’t spend, they hold back, depriving the broader economy of that consumer expenditure which is always the key driver both of growth and of gainful employment. Homeowners’ malaise accordingly becomes the community’s and the macro-economy’s malaise, leading to years, if not decades, of lost growth and potential. Just look at Japan over the past 25 years, or the U.S. and much of Europe over the past ten.

This is shear deadweight loss – in effect, ‘money left on the table.’ It is altogether needless waste – waste of communal and national growth opportunity, employment opportunity, and indeed individuals’ and families’ opportunity to lead healthy and happy productive lives.

If Ireland is to avert the U.S.’s, Japan’s, Scandinavia’s, Spain’s, and many other sick macro-economies’ fates, then, it must massively write-down underwater mortgage debt, letting the losses be borne by those who can best afford them and who are most responsible for them in the first place – the well-healed and often exploitative creditor institutions that fueled the world’s housing bubble, not the victims of that exploitation and the speculative bubble that it inflated.

There are straightforward ways to do this, ways that apportion loss fairly and efficiently – and ways that accordingly minimize losses in aggregate while hastening the coming of that day when Ireland, its homeowners, and its economy can at last ‘move on.’ Why would any communitynot do this?

‘The quality of mercy,’ it is said, ‘is not strained; it droppeth as the gentle rain from heaven upon the place beneath.’ Much the same can be said of both justice and commonsense efficiency. Ireland’s is a community which has seldom been short of the qualities of mercy, justice, orefficiency. If it is to remain true to itself, then, Ireland must undertake to have mortgage debt stricken, acting for the benefit of all of its people rather than simply of hedge funds. In so doing, ironically, it will be benefitting its financiers too in the long run. For a truly rising tide does in the end lift all boats. And in this case you raise the relevant tide by preventing the millions who ride in the smallest boats from capsizing and drowning.